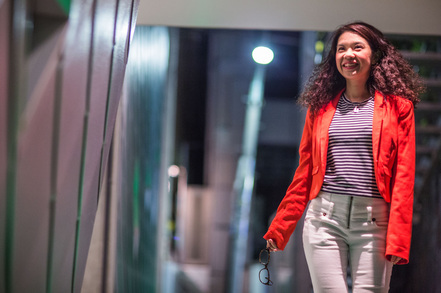 Yoshiko Hida is originally from Tokyo Japan.
she started tap dancing when she was 6 years old. she also trained Jazz dance and Electric Organ at the same time.
when she was 18 years old she had seen broadway musical 'Bring in da noise Bring in da funk' in japan. she inspired from that musical a lot. after one year later, she had a opportunity to join 1st annual LA tap festival in 2002.
In 2004, she came in NY by herself to started to train her Tap career. she learned from Savion Glover, Derick Grant, Jason Samuels Smith,  Roxane Butterfly, Ayodele Casel, Michelle Dorrance and more great tap dancers.
she was one of crew for Roxane's show 'Hoofalogies' at Duke theater in NY in 2005.
she performed with Derick Grant at tap city 2005.
she  went to San Diego to do WS also.
after she went back to Japan, she worked great japanese tap dancer who is SUJI, RonⅡ, Yukiko Smilie Misumi, etc.
she got offered to join Taipei tap festival in 2008, also joined Hong Kong tap festival in 2011.
she was in short film of 'Tap Dreams in japan' which is Chloe Arnold's projects. she could get to scholarship to went to join the LA tap festival to perform in 2009.
recently, she was working with japanese taiko player. and tour with them in East side of Africa.
she is working with SUJI and Shoko Taniguchi these days a lot. she is one of crew of 'women in tap' also 'Traveling Souls'
she still wants to train her tap career to try to come to US as much as possible.